You can begin to understand how television serials from your childhood can influence you in the present… when you’ve seen Digimon. Digimon is exactly the kind of anime series that can bring tons of laughter, excitement, and joy – you can be 8 or 18 or 28 and still be drawn to the series. The plot leaves you in suspense and the adventures are engaging to follow along. Just have a look at that Digimon logo! It can bring a wave of nostalgia (or you’re like pssh Pokemon was way better). One thing we can all appreciate, however, is how the whole concept of Digimon reflected Japan’s rapid technological developments during the 80s and 90s, which makes it an important series in addition to its entertainment value.

END_OF_DOCUMENT_TOKEN_TO_BE_REPLACED 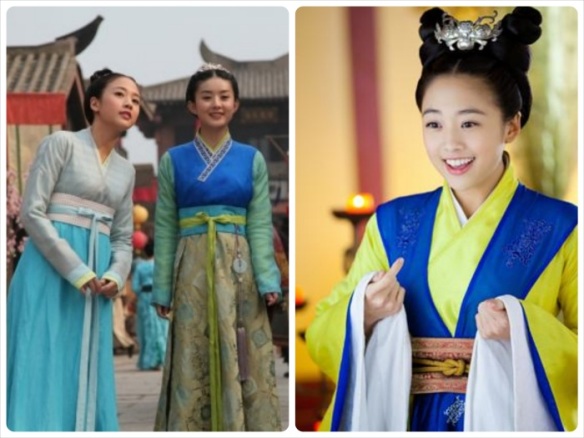 The gorgeous color combinations of Lu Zhen and Dan Niang’s outfits in Legend of Lu Zhen 陆贞传奇 (or as previously dubbed Female Prime Minister) are a sight to behold. My personal favorite was the cobalt blue and bright yellow outfit, which is my modern interpretation below:

Female Prime Minister by taropooh featuring a sash belt
I came up with a feminine yet fierce outfit comprised of a yellow dress and cobalt blue motorcycle jacket. Legend of Lu Zhen is about the rise of END_OF_DOCUMENT_TOKEN_TO_BE_REPLACED
July 21, 2012

…hands down. If you wondered to my Currently Watching list, you’ll probably know that I have been busying it up catching all sorts of asian TV dramas lately. That, and preparing all sorts of awesome fashion/hair posts for my style blog. And biking to faraway locations, trying to get fit for summer.

So there’s this one guy who is probably now my favorite character out of Fashionable Female Editor. His name is ‘Tao Mi” (notice the chinglish pronounciation, it’s actually supposed to be Tommy haha) and he’s this super spicy male fashion stylist for a new magazine startup company in the story. I love this character for his multidimensional role (yep, you read that right. he’s a small character, but I love that his character gets fleshed out throughout the show). I also love that he acts like an older brother to female lead, Cheng Xin (played by Yin Tao) and lends her a helping hand when she needs it the most. I was planning to drop this series because the first few episodes weren’t all that exciting, but then BAM, episode 10 happened. Read on below for more pictures of the boy and information about this drama…

END_OF_DOCUMENT_TOKEN_TO_BE_REPLACED

Update: I just found this super awesome post on 10 Things to Expect in a Historical Drama! If you’ve never seen historical tv series or want a little bit of humor to your day, make sure to check this out.

TO start off this post…I swear, some actors just look hotter in a bathrobe and a top-bun (aka in dynasty costumes). Tang and Qing dynasty stories are the norm for drama-making material, because the Chinese are proud of their rich dynasty lifestyles. China makes a LOT of these kinds of shows. Unfortunately these are not as talked about as say, Korean idol dramas (and sageuks, which are like the Korean version of these ancient time period series), so that’s what this post is here for! Lo and behold, here are a few of my favorite characters from historical dramas (thanks to these actors who rock their period garments).

Luo Jin’s screen presence can be talked about in two words: engaging and commanding. From his first mystery-shrouded appearance with the mask, I knew he was the one to watch for in big-budgeted 2010 drama, Schemes of a Beauty. END_OF_DOCUMENT_TOKEN_TO_BE_REPLACED